Alter Ego of The Egg

"I won a pie-eating contest when I was like, a kid, on like, summer camp. Everyone was like "Oh I didn't eat all day", even all the fat kids, and then oh I won. I beat em all, and I was like the little guy. Well what happened now? You LOST!"
―Burgah Boy after another pie-eating contest

Burgah Boy, real name Matt and sometimes known as Burgah Man, is one of Jerma's childhood friends, and one of the first ever Jermaverse characters to appear in his videos.

Burgah Boy was born in Boston, and he and Jerma met sometime in their early years. They kept in touch and remained good friends, even up until today. He first appeared on Jerma's channel playing Left 4 Dead 2 with him, Boo, and MLC St3alth. From then on he appeared randomly in Jerma's videos, often time being mentioned or brought up by Jerma even when he wasn't there. Burgah Boy also had his own YouTube channel at one point, though he deleted all of its old content some time before 2015. Allegedly, all of the videos were "let's plays" that involved him screaming super loudly and pretty much just being awful.

Burgah Boy has since grown into a handsome man who is now married, employed, and even has two children.

Burgah Boy was the 12th fighter to enter the ring in the first Jerma Rumble. He forgot to wear pants to the event. He unfortunately didn't last very long, and was eliminated by Ben Franklin in less than a minute.

Burgah Boy returned for Jerma Rumble 2, this time wearing nothing but a towel around his waist and being the 18th fighter to enter the ring. Despite the advantage of being such a late entry, however, he was still eliminated by Cap'n Crunch after a good fight.

Burgah Boy appeared, portraying himself, in the live Jerma Rumble. He was the 5th fighter to enter. He tried to do a bunch of pro wrestling moves that actually looked pretty painful and dangerous, showing his dedication to the match. He managed to eliminate Glue Man, his first elimination of his entire career. After Burgah Boy's elimination at the hands of Dick "Dastardly" Richard, he also returned to briefly portray The Egg.

Burgah Boy made his first live appearance in the Jerma Universe in the video "2000 Subs Extravaganza!", in which he was dressed as the Engineer from Team Fortress 2, along with Jerma who was dressed as the TF2 Scout. They were celebrating Jerma achieving 2,000 YouTube subscribers by doing a skit where Jerma would stun Burgah Boy by hitting him in the head with a baseball, a reference to The Sandman weapon used by the Scout in TF2, and throwing three different cakes at him.

Burgah Boy made an appearance, along with Exoskeleton Bug Millennium Boy, in a twinkie speed eating contest. Unsurprisingly, Burgah Boy won with a whopping 11 to ESBMB's 9. Later in the video the two also competed in who could eat a pie the fastest, Burgah Boy once again winning overwhelmingly. Burgah Boy is just a real winner here.

Burgah Boy once appeared for Scare Saturdays watching Jerma play a custom story in Amnesia: The Dark Descent. After laughing at Jerma for getting scared by a jumpscare, Burgah Boy coughed so hard he puked into his own hand. This was a legendary benchmark moment for Burgah Boy and would go on to define his internet career.

The Dingus and Dungus Task Force[]

Near the end of Jerma's video playing Call of Juarez: The Cartel with Ster, Jerma decided to extend the recording session. Burgah Boy had been planning to come visit, so Jerma called to tell him not to come over yet. Burgah Boy got angry and Jerma awkwardly hung up. In the end, Burgah Boy was okay though.

After playing Wheel of Fortune on stream, Jerma told a story of his youth with Burgah Boy. One time they were hanging out at Burgah Boy's house playing SMITE. Burgah Boy got really high on weed and made a private room for them to use with a password. Jerma asked what the password was and Burgah Boy pronounced it [pipæns]; Jerma rationally assumed he meant "pee pants", but upon closer inspection he discovered Burgah Boy meant "peepance". This was another defining moment for Burgah Boy's career. 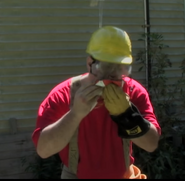 Burgah Boy eating a hamburger in the video "2000 Subs Extravaganza!" 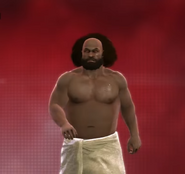 Burgah Boy in just a towel

Community content is available under CC-BY-SA unless otherwise noted.